A Weekend to Remember! 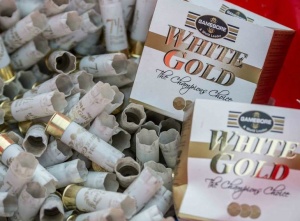 Westfield Shooting Ground played host to the last major clay shooting competition of the year, the Gamebore Gold Cup, with 150 Sporting targets set by Steve Lovatt who had intended to hold an exciting shoot that competitors would enjoy, with his usual testing standard of targets mixed with one or two stands with a twist.

The sun shone for the whole of the three day event, during which hundreds of shooters tackled the course which included a Three Rabbit stand where shooters had to choose two of the three targets to shoot at, a stand where the target is released the moment the shooter closes the gun, and the famous 'Good Luck' stand where as the name suggests, the competitors needed more than just skill on their side.

George Digweed shot the course on Saturday morning. A seemingly effortless and quick assault on the 150 clays, putting in a unbelievable score of 144. Pleased with his performance and praising the organisation of the event - George said "A really good shoot by Steve Lovatt today. A great set of 150 targets. Something for everyone. I'm pleased to have won the Gamebore Gold Cup for my sponsors Gamebore Cartridge Company."

Making a comeback after a lengthy break from shooting clays competively, Kate Brown (World English Sporting Ladies Champion in 2005) shot the course amazingly well to put in a score of 130/150 topping the Ladies scoreboard. Full results from the Gamebore Gold Cup can be found here.

Alongside day 3 of the Gamebore Gold Cup ran the grand finale of a major championship that began way back in February with the first of thirty-two qualifier events that took place throughout the year to decide who would shoot-off for part of an £11,000 cash prize pot - The White Gold Challenge, which culminated in a round of shoot-offs that kept the crowd entertained all day.

The shoot-off for the Gold Category title was between Ed Solomons and Scott Barnett who shot a round of 20 flash clays in the White Gold arena to determine who would take home the £3,000 cash High Gun prize. The audience watched as both hit 18/20, and it was decided that another 20 targets was necessary to decide the winner. Remarkably, much to the crowd's amusement their scores tied again, so they went head to head yet again and it proved third time lucky for Scott from Cheshire who bagged the title. Runner-up Ed Solomons took home £1,000.

We were delighted to see some youngsters in the Silver Category of the Challenge: Harry Lovatt and Brody Woollard both made it to the money stages, shooting amazinly well under pressure in front of the crowd. It was an absolute pleasure to see them both doing so well in a major competition against senior shots. The Silver Category High Gun prize went to Matt Barnett, the very last person to qualify for a place in the final, who won £3,000 after the shoot-off.

You can see all of the action from the White Gold Challenge final at ClayShooting.tv